The January 2018 Bank of Canada (“BOC”) Monetary Policy Report announced strong growth in the Canadian economy during 2017, including near-capacity levels of economic activity.[1] By their estimates, GDP growth came in at around 3% for 2017 with approximately 70% of that growth derived from domestic consumption – a historically normal level of household consumption for the Canadian economy (see Graph 1, below). 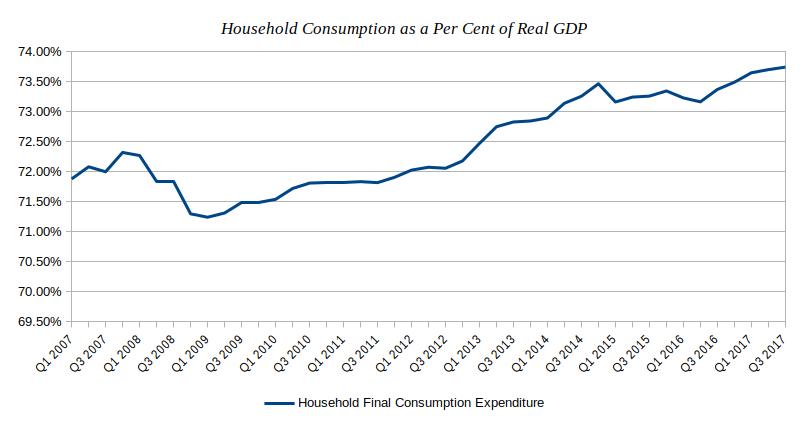 Over the past decade, Canada’s household final consumption expenditure – the country’s aggregate demand for both durable and non-durable goods, and services – has ranged between 71-74% of GDP, per Statistics Canada data. As observed in Graph 1, a decrease in labour demand – causing higher unemployment – and negative economic sentiment visibly affected household consumption during the recent 2008 financial crisis. Post crisis, household consumption has shown an upward trajectory, surpassing the pre-crisis levels by mid-2013 and continuing higher.

What factors are driving this consumption trend? Income growth is the usual suspect; however, considering reports of high household debt due to the current low interest rate environment, it may be partially driven by borrowing.[2] If this is the case, some concern over the sustainability of current consumption levels is warranted.

Comparing data on growth in household consumption to growth in wages and salaries, it’s not clear whether the tail is wagging the dog (see Graph 2, below) – nor is it clear how much rising household debt is funding consumption. 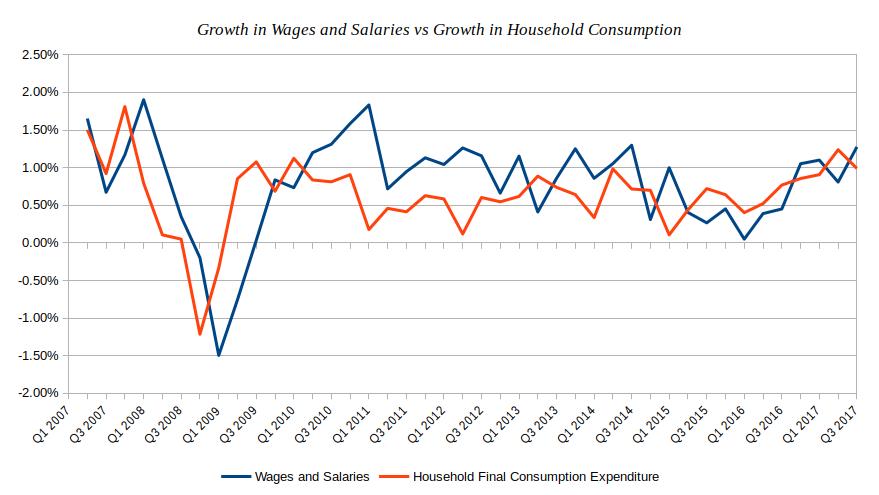 One would expect to see growth in wages (the dog) acting as the economic driver of consumption (the tail): in other words, growth in household income should be driving growth in demand for goods and services, not the other way around. However, from mid-2007 through the beginning of 2010, what is apparent is that change in household consumption is actually preceding change in wages and salaries. That being said, maybe one is not simply leading the other, maybe market sentiment or expectation is the driving force behind both wage growth and consumption.

Another detail observable in Graph 2, is the decoupling of growth in wages and consumption, which occurs in 2010 and intensifies in 2013 – here growth in both measurements begins to trend in a closer quarterly range of 0.5-1%, both ending 2017 with an upward trajectory. Again, this decoupling and range stabilization may have more to do with positive changes in economic sentiment, a reluctant and subjective nod that the market is safe once more, then it has to do with any other single element.

Just as market sentiment and expectation act as key drivers of growth in wages and consumption, similar factors drive inflation. Maybe it’s only that rising inflation affects consumers’ sentiment – after all, if you’re buying on credit, inflation and rising interest rates will constrain your purchasing power. Or maybe it’s that today’s price (or current inflation) is somewhat influenced by market expectations of future prices (or future inflation): as we know, inflation expectation is priced into market interest rates, so why not other goods and services?

For all the above reasons and more, the BOC has kept check on market sentiment and expectation by regularly reiterating their goal for a controlled 1-3% range of inflation, and an actual 2% target inflation rate.[3] As expected, but still slightly short of the mark, the BOC reported 2017 inflation at 1.6%, which is close to Canada’s decade long average of approximately 1.5%.[4]

Also notable in the bank’s recent Monetary Policy Report was mention of increased prospects for growth in exports due to “stronger US outlook and higher commodity prices”.[5] Growth in exports, if true, is likely to soften the impact of the bank’s forecast declines in household consumption caused by increased debt-service costs. In other words, when Canadian households have less cash to spend on goods and services as their home mortgage interest rates rise (decreasing household consumption) growth in the US economy should increase demand for Canadian goods (increasing exports) cushioning any potential impact to the economy.[6]

Calling into question the probability of increased US exports, however, the BOC report also cites NAFTA renegotiations, or “protectionist global trade policies”, as the “most important risk surrounding the [risks to inflation] outlook”.[7] This point emphasizes the importance of smooth NAFTA renegotiations for the continued health of the Canadian economy. A bad trade deal, and/or slowing exports, paired with slowing domestic consumption would mean a hit to economic growth and employment numbers. However unlikely, the risk is present.

Other possible economic risks highlighted in the bank’s report include NAFTA-related trade uncertainty, rising household debt, and a pronounced decline in house prices in overheated markets.[8] Any of these factors could undermine the bank’s need to gradually increase interest rates.

On that topic, the BOC report also points out that “Economic activity is being supported by still-accommodative monetary policy and financial conditions, as well as public infrastructure spending” – herein explicitly referring to the BOC’s overnight interest rate currently standing at 1.25% as of the last 25 basis point increase in January 2018.[9] To be clear, we still have a ways to go before the bank truly puts the breaks on its accommodative monetary policy with rates in the range of 4-6% being the norm in the past few decades [see Graph 3, below].[10] 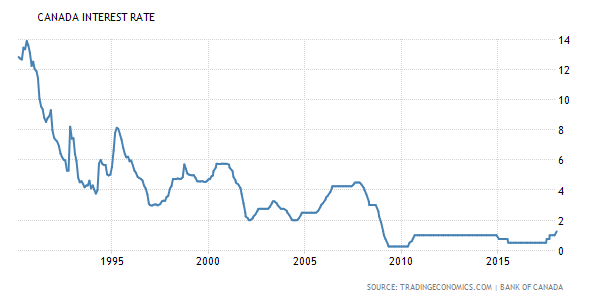 As we will show in the next article, the bank’s need to raise interest rates is obvious when we examine the current state of the Canadian real estate market. The big question – to which no one knows the answer – is, how will the BOC raise interest rates without causing an implosion of the country’s ballooning household debt?

[10] The Bank of Canada’s Timothy Lane, in his March 8, 2018 speech titled Canada’s Economic Expansion: A Progress Report, states that the BOC’s current natural, or neutral, policy interest rate — the rate that would balance the economy in the long run — is estimated to be in the region of 2.5 – 3.5%.